This post has taken a while to publish - as it necessitated a trip into the loft to recover some old maps and charts. Still cannot find the chart I was looking for, so I expect we will return to this topic in the future!

When I was in the "top" class of my infants school, I have a clear recollection one clear, bright and blue afternoon, noticing the white needle flight of high flying contrailing aircraft heading west towards the sea. This was in the early 1960s, so I suppose these were Boeing 707s or Douglas DC-8s, or other first generation transatlantic jet airliners. 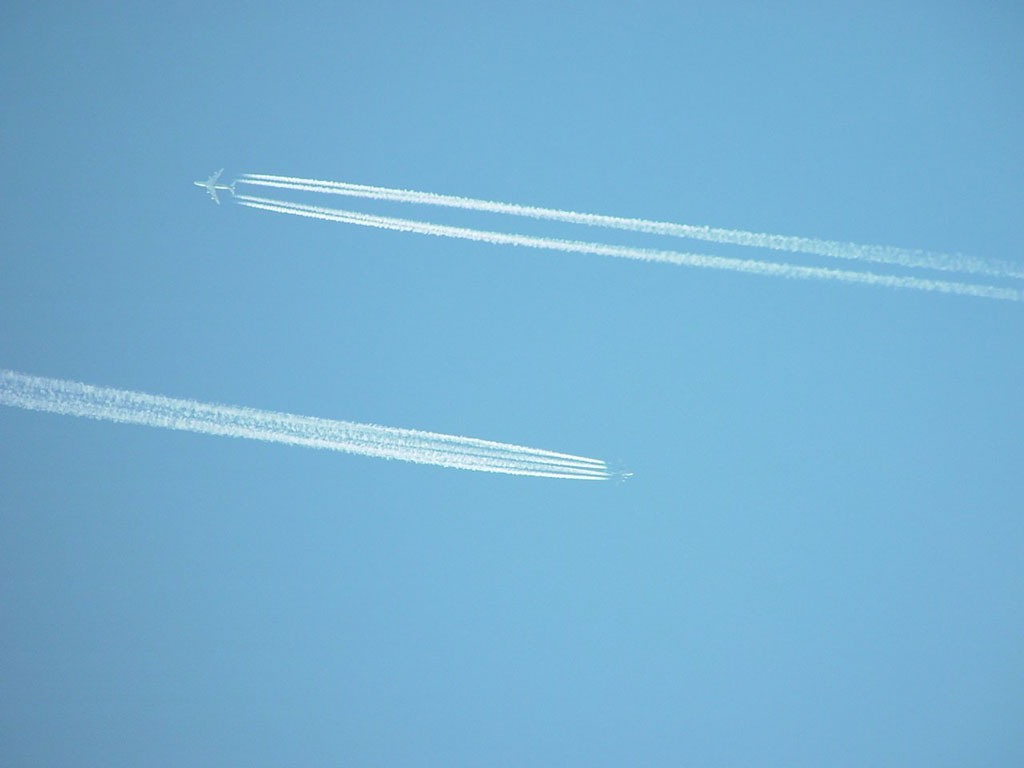 My dad told me that this was airway Green 1. I was bemused by this - where were the white lines? How did the pilots know how to follow the "road"? Where was the "road"?

Airways within the UK at that time were identified by by a colour and number combination. The airway Green 1 (separated into Green 1 Upper and Green 1 Lower), ran from a reporting point and "radio range" south east of Frankfurt (Rhein-Main), to the west coast of Ireland, near Shannon. The charts below show the airway's route over the UK in 1960. The top picture shows the Lower Airway (up to 25000 ft) and the second chart the Upper Airway. The two charts shown here were issued by the RAF and so some of the detail, such as the code numbers for danger areas, differed from the civilian versions of the charts. The danger area UK-609, marked on the coast of South Pembrokeshire and showing the Anti-Aircraft Artillery Range at Manorbier, was depicted on civilian maps at the time as UK-W9. 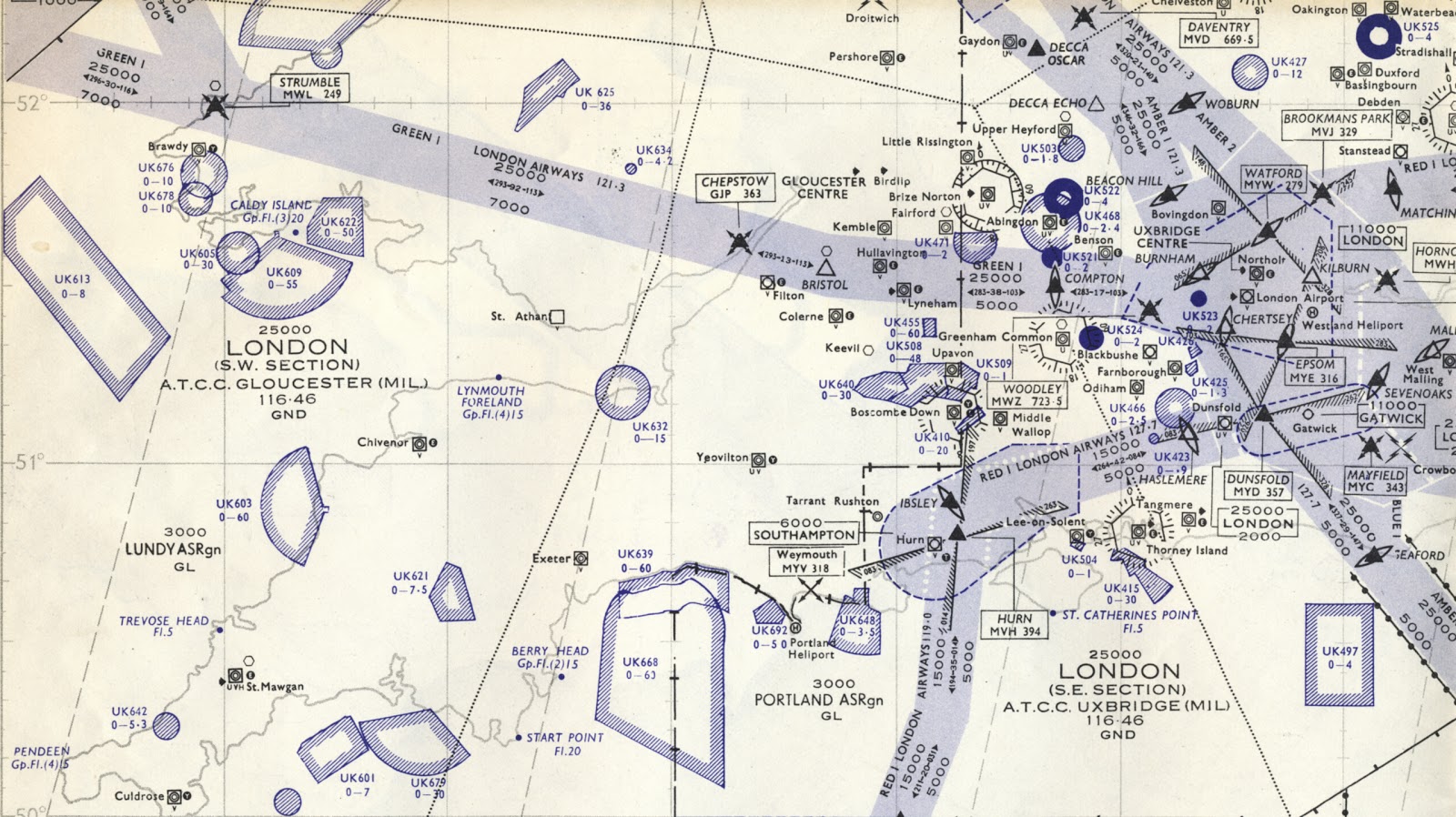 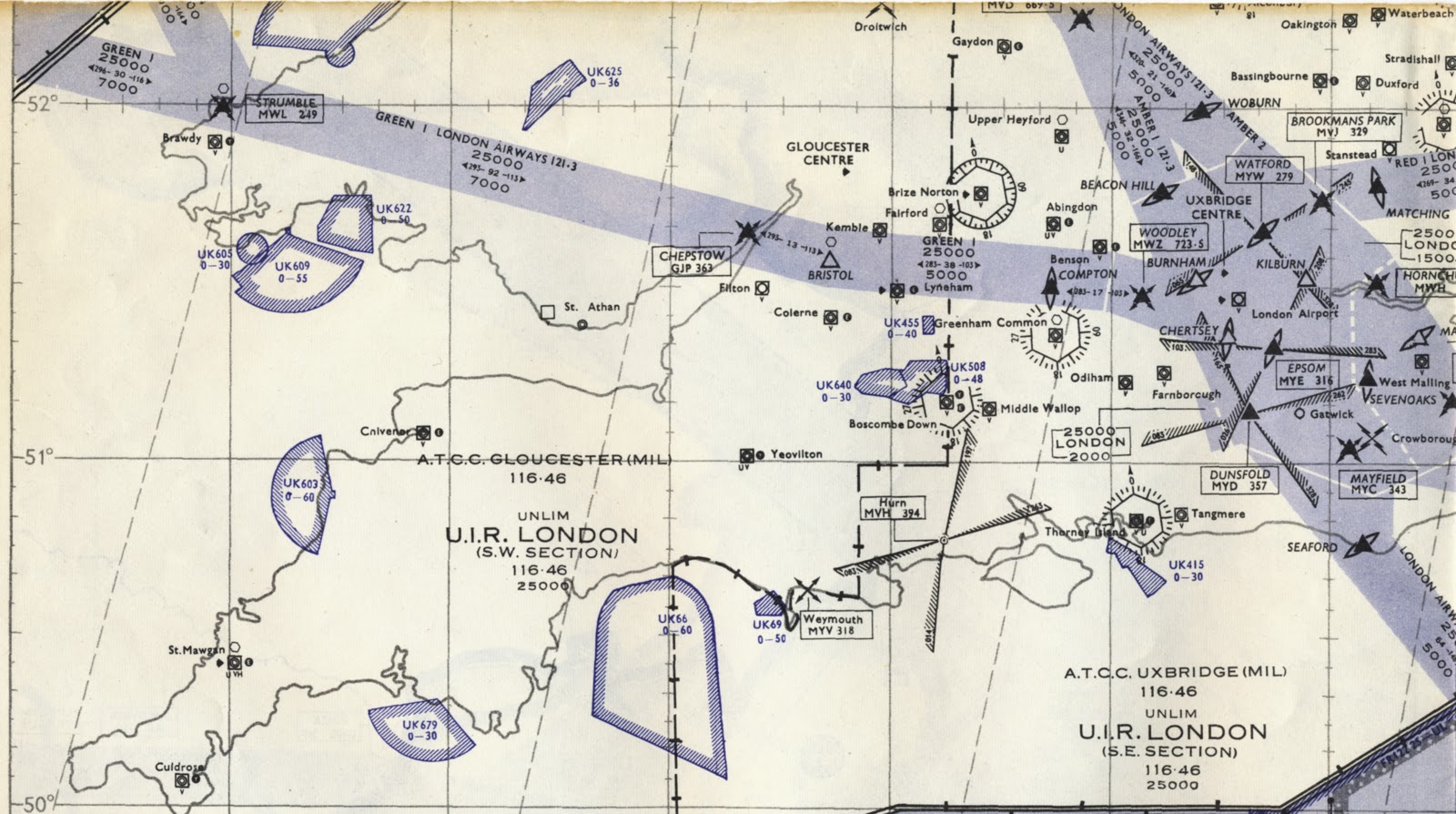 Over Wales, in 1960, Green 1 ran between a beacon at Chepstow (GJP 363) and one at Strumble (MWL 249). These two positions were also compulsory reporting points, where aircraft had to report their position to Air Traffic Control (ATC). The letters and figures in the boxes with the name of each beacon were the three letter morse identifier for the beacon and the frequency it operated on in kilohertz (kHz).

Of course, Airway Green 1 had been born may years before 1960. Immediately after the Second World War it was realised that communication by air was important, but it would have to be controlled to ensure the safe passage of both freight and people. Civilian passenger flights had continued over the course of the war, and indeed Pembroke Dock was used as a terminal for civilian flying boat flights between Britain and neutral countries in other parts of Europe, particularly in the Iberian Peninsula. The extract from the chart below shows the route of Green 1 across the UK in 1957.

The next series of charts show the airway a few years earlier. The naming of the route "Green 1" can probably be traced back to the latter years of the war when the US Army Air Force Air Transport Command designated particular routes that transport aircraft flying to and from the UK were expected to follow. 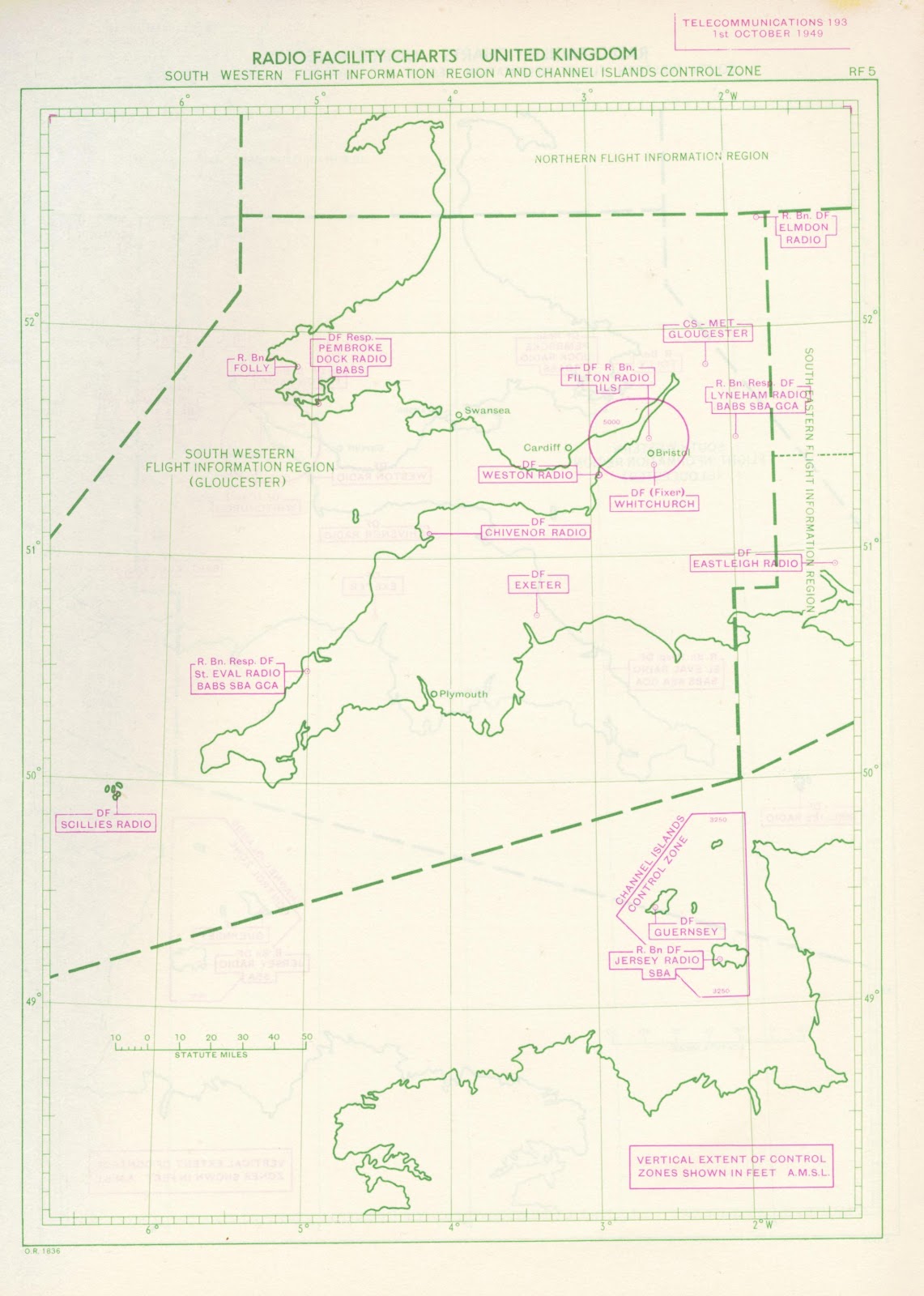 The chart above shows the radio facilities available to the civilian pilot on 1 October 1949. The chart is taken from the "Air Pilot" of that month. the "Air Pilot" was the operating "bible" for pilots and was a weighty tome that gave navigational information for the UK. There were no designated airways, but Green 1 would make an appearance in less than twelve months time.

January 1951 from AP3192E. The introduction of the airways system into the UK began on 1 August 1950. For a contemporary account of the plan, see:


The introduction of the airways system was phased in three stages, so that by the end of 1952 it was fully in place, as shown in the next chart.

Minor changes in the organisation of UK airspace occurred monthly, so that the facilities available to pilots to help than navigate safely, in a sky that was becoming ever more crowded,  evolved gradually over time. 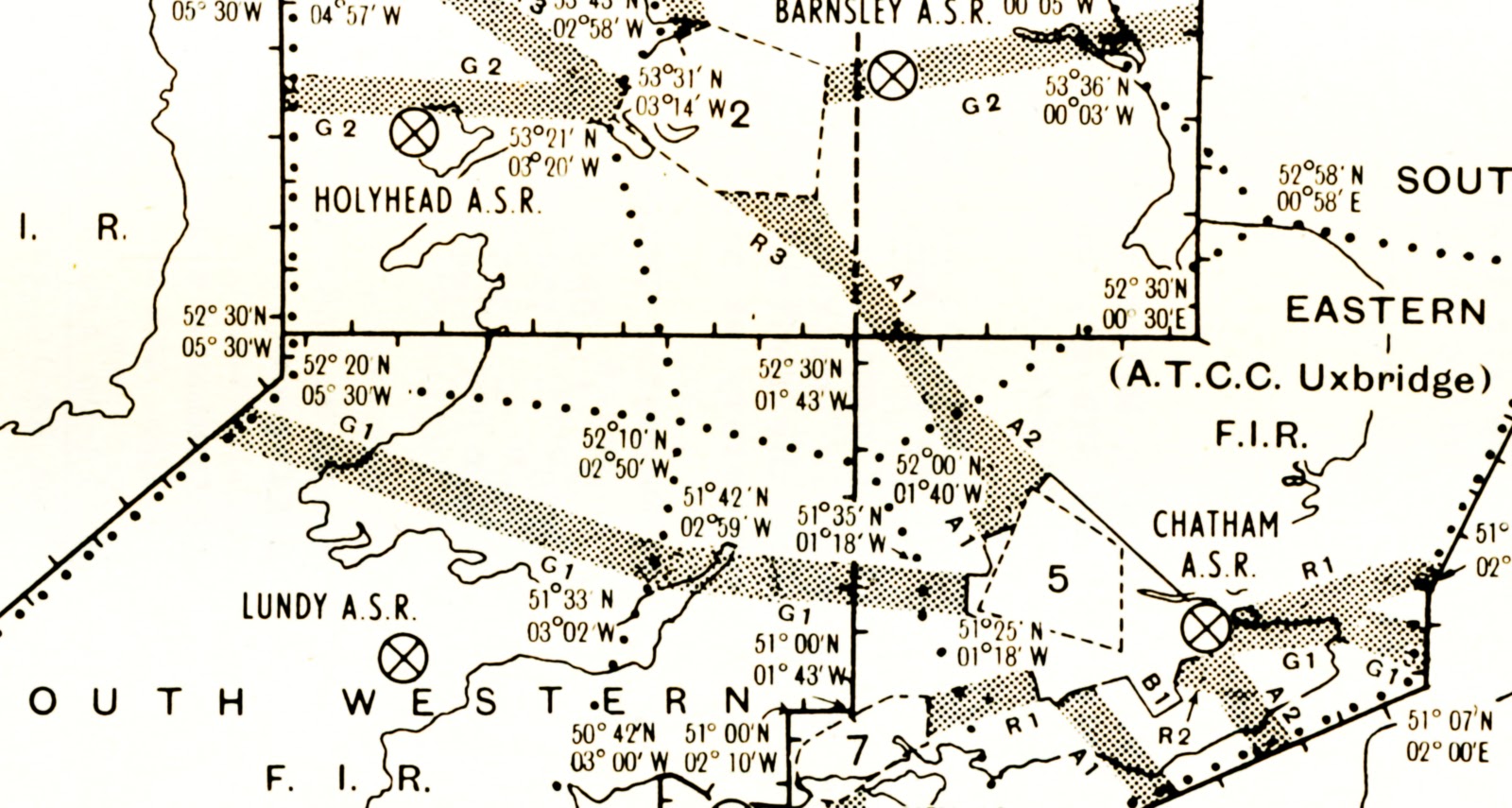 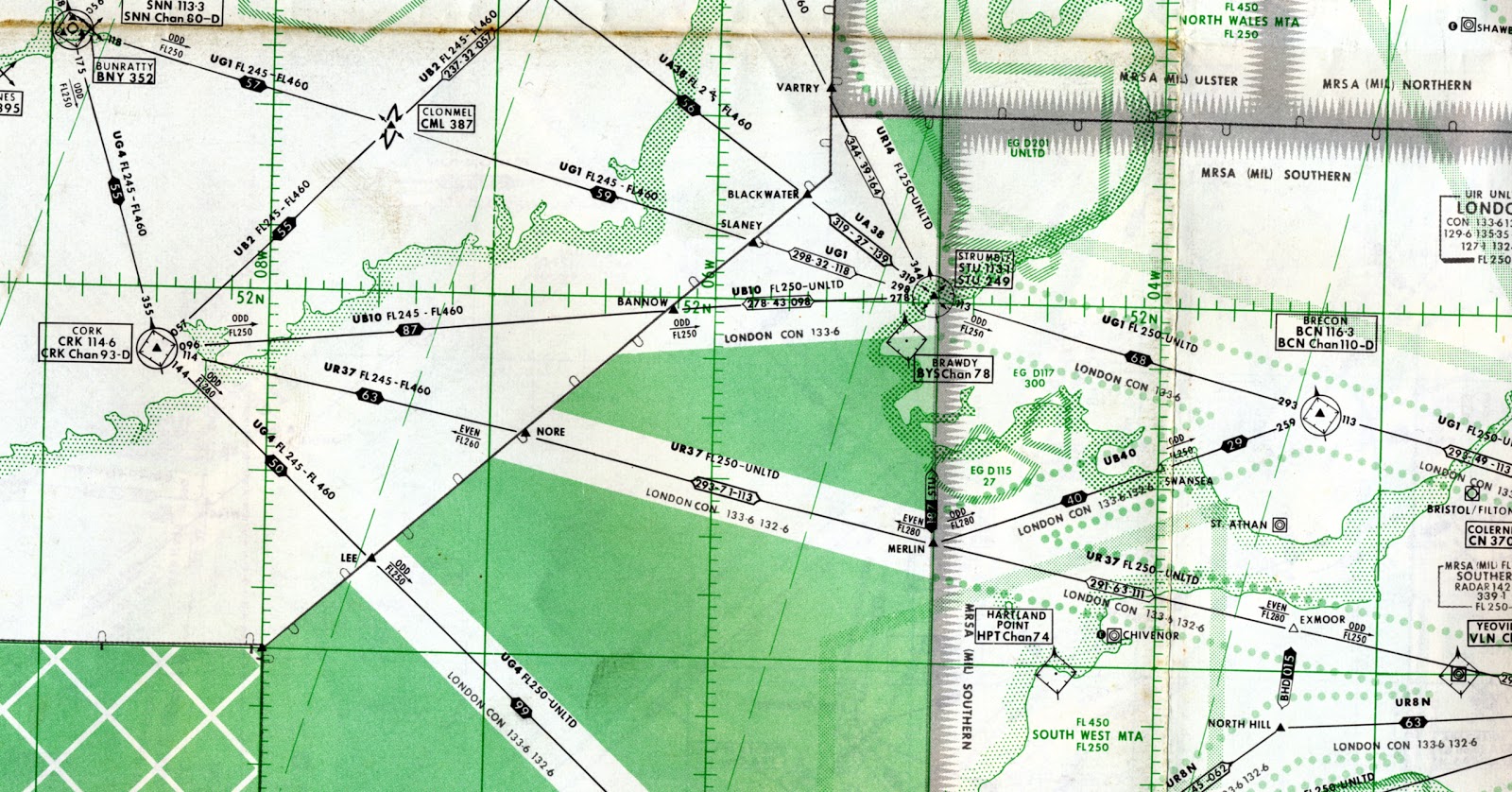 This chart shows the growing number of airways. West of Strumble, the airways fan out to accommodate the burgeoning numbers of aircraft crossing the Atlantic, as well as the more local traffic within the British Isles. By this time Green 1, as with other airways has lost its colour and is now known officially as Airway G1 or UG1 (Upper G1).

Also seen on this chart is the airway UR37, brought into play to provide a route down the Bristol Channel for Concorde to accelerate to supersonic speed on its way to New York. The mid-evening winter double window rattle was a reassuring reminder of British technical prowess for the people of Pembrokeshire until the (probably) most beautiful aircraft ever built was retired.

Alas, "The Green One" is no-more. The route is now known as L9 and UL9 following more recent redesignation of airways across Europe, and indeed the world. Nowadays commercial air traffic is less constrained, and does not need to adhere to the ten mile wide virtual roadway marked out by a variety of fixed radio aids. Inertial navigation systems (INS), which allow aircraft to fix their positions by sensing the way they have accelerated and decelerated, reduced the need for airliners to leapfrog from beacon to beacon. Satellite navigation systems provide even greater accuracy and certainty of position. Modern Flight Management Systems (FMS) make much of the navigation demands placed on pilots both safe and reliable (http://en.wikipedia.org/wiki/Flight_management_system). The result is that aircraft now roam more widely over the Pembrokeshire skies and there is less need for them to follow the old route of Green 1.


The title of this posting is "The Green One". My mum always called the airway "The Green One" after seeing a notice at the roadside marking the track that led to the VOR beacon on top of the hill at Pencaer. Many visitors thought the beacon was called "Green 1", and attached the name, like my mum, to this windswept spot in west Wales. However......


.....Green 1 was the highway to Belgium for the European traveller and the aerial roadway to the Atlantic for the western venturer.

Today it is the more prosaic Lima 9. To me it will always be Green 1.

Thanks to the following forums for advice and information!

If you can add to the information in any of my blog postings, or have a question, please write a comment, or use the contact form I will endeavour to respond as soon as I can.

Other Pages and Links